Vue Vs. Angular Vs. React Comparison

Let us imagine that you want to bake a cake. You decide to use a random set of products and mix it in an accidental amount. But, such a method of cooking does not guarantee you a predictable result. Instead, you could use a recipe with all the ingredients and proportions.

It is the same with web app development. Instead of developing some code from scratch, you can use ready-made templates, and this is where JavaScript frameworks come into play. Still, choosing the right solution might be challenging.

A new JS framework appears each month and there are too many options to choose from. While some frameworks are great for a big project, others are the perfect match for a simple app.

If you are looking for a perfect JavaScript framework, you are in the right place. Below, we share the comparison of Vue Vs. Angular Vs. React and valuable insights based on the Project Management Triangle. Thus, you can select the most suitable programming tool for your project.

What is a JavaScript framework?

Why you should actually use a JavaScript framework

So, you decided to create a website with some intricate features. But, do you need JS frameworks for that? Let's find out.

By using JS frameworks, you can create a comprehensive web app in the short term. Besides, JS frameworks cut the development cost because they include built-in functions.

Vue Vs. Angular Vs. React pros and cons

Vue.js, Angular, and React are the most popular solutions for front-end development. 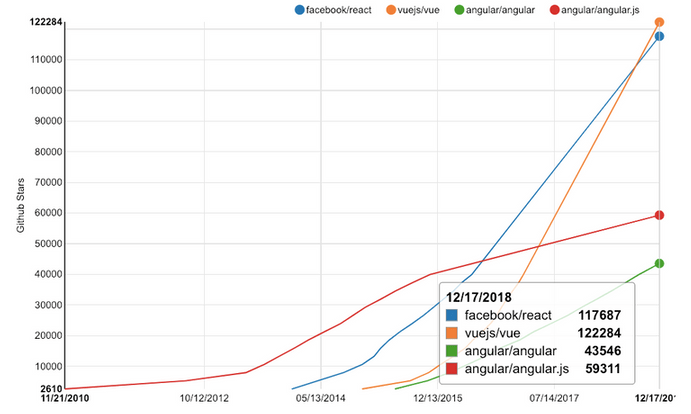 [ JS frameworks with the biggest number of stars on Github ]

Why you need to choose Vue.js

Vue.js is a JS library developed by a former Google employee, Evan You, in 2014. Vue is your solution for creating medium or large-sized web apps and sites. The Vue developer, Evan You, calls his creation a Progressive JavaScript framework. By this, he means that developers can add other libraries, like Vue Router, to the Vue core. You can find even more add-ons on the official Vue.js website. Vue powers such famous sites as 9gag, Alibaba, Adobe. The total amount of websites powered by Vue is over 64k.

Now, let us take a closer look at Vue.js, its advantages, and disadvantages.

Why you need to choose Angular

Angular, a javascript framework maintained by Google, is a perfect solution for hybrid, native, or web apps. Angular has MVC (Model-View-Controller) architecture.

How does Angular work?

It allows developers to divide the app component into three groups for better maintenance, which works great, especially for large-scale and feature-rich applications. Currently, Angular powers YouTube, Telegram, PayPal, and Upwork websites. The total number of sites powered by AngularJS and Angular 2 frameworks, is over 350k.

Why you need to choose React

React is a JS library created by Facebook developers. React is the best for building interactive user interfaces. Apart from the pure React library, developers can use other React versions. They include React Native for mobile apps, ReactJS.NET for cross-platform apps, and DevTools to inspect the React component hierarchies. React powers Airbnb, Netflix, BBC, PayPal, and another 475, 000 websites.

So what are the advantages of React?

Vue Vs. React Vs. Angular Comparison

We compare the most popular JS solutions on the basis of the following parameters:

Community support. Both Angular and React are supported by top companies, such as Google and Facebook, and have strong communities. At the same time, Vue is popular among the open-source community.

Learning curve. A more significant amount of developers prefer to use and learn Vue, followed by React and Angular.

Flexibility. The most full-fledged solution is the Angular framework, while React is the most flexible. At the same time, Vue, which uses ready-made templates, is less flexible.

React vs. Angular vs. Vue: The Project Management Approach 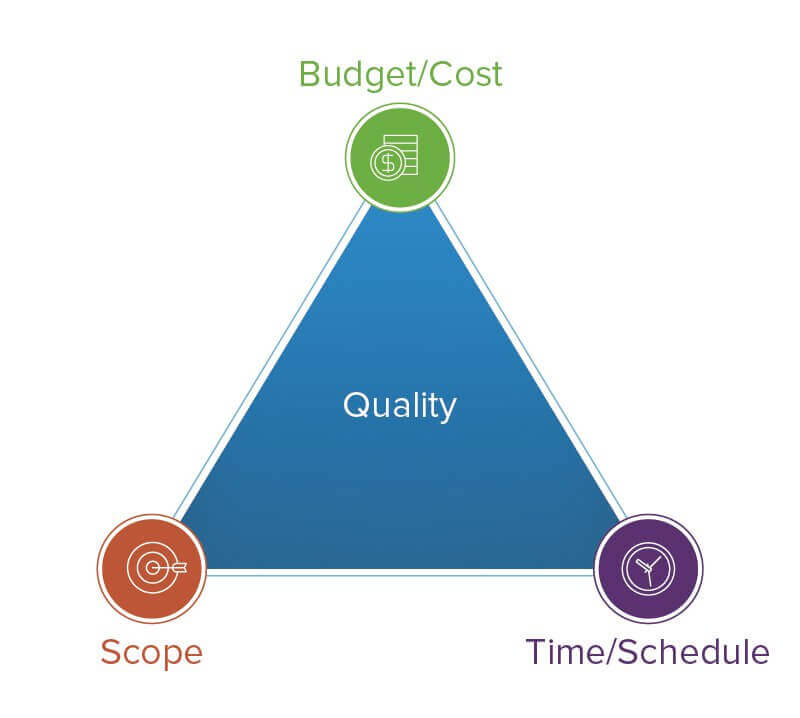 You can use the Project Management Triangle to find out what JS framework suits your situation.

If we imagine several scenarios, we will see how the framework may impact project cost, schedule, or quality.

You want to create a website with some interactive features. You have enough budget, but you need to ensure that the web app MVP will be ready after one month of development.

What JS framework would you choose? The answer is Vue.js. Why? Let us see.

Vue.js templates decrease the app development time. Besides, Vue is smaller and faster than React and Angular and is simpler in terms of syntax.

We used Vue.js for our recent project to develop the admin side of a driving simulator web app. Vue helps us to integrate the built-in messenger, interactive schedule, and other features. Besides, the client wanted to create a native mobile app for his web driving app. This is another reason why we used Vue since it allows for developing mobile applications on Vue Native Script.

Next scenario. You want to create a custom, medium-size web app for your banking system. You do not have tight deadlines for your project, but the issue is that you have a tight budget. So, what would be your solution?

Our answer is React. Why? Check this out.

Thanks to its flexibility, React works great to develop a custom solution. The virtual DOM makes React a perfect match for developing dynamic applications. In this way, the app can react more quickly to the data, changed by app users.

Now, let us imagine that you want to create an online social media platform. The platform should be powerful enough to handle 2,000 users per hour. The platform users will create profiles, share media files, and write messages. At the same time, you received enough funds from investors, and you're not in a hurry.

What JS framework will you choose? Our answer is Angular.

Angular has an advanced MVC (Model–View–Controller) architecture pattern. This framework allows developers to create a well-structured code, even for complex projects. With such an approach, Angular apps are more convenient to manipulate. Therefore, Angular is the best JS solution for developing and maintaining big projects.

To conclude, frameworks in programming are like recipe books for cooking. You can start the developing process without frameworks, but the result will be quite unpredictable.

As we said, each framework and library has its advantages and disadvantages. To choose the right solution for your project you need to consider developer resources and your business goals.