Swift vs React Native: Which one is better to choose when developing your app for iOs

When you want to build an App for iOS the primary question is, “Should I develop a native app on Swift or a cross-platform solution on React Native”? Here is the deal. It is always better to use Swift for iOS apps. Still, in some cases, React Native could be your platform of choice. Below, we explain the difference between Swift and React Native, their pros and cons to help you choose the right solution.

Swift was created by Apple in 2014. It works with Apple's Cocoa and Cocoa Touch frameworks. Besides, Swift supports the existing Objective-C code developed for Apple devices. Swift has 48.2K GitHub stars and 7.71K GitHub forks. Swift is perfect for projects with complex infrastructure, native iOS features, and in-app payment. We used Swift for our recent project, Openbucks because the app required data modeling, transaction processing, and third-party integrations. To find out more, read the full case study.

[Openbucks app by the App Solutions]

If your app requires complex integrations as well, use Swift.

What is React Native?

React Native, a framework designed and supported by Facebook is used for cross-platform mobile applications. React Native uses JavaScript. Thus, developers can share up to 70% of the code between various platforms such as Android and iOS. Codesharing reduces the development time and cost of cross-platform apps. React Native has 78.3K GitHub stars and 17.5K forks on GitHub.

VUE VS. ANGULAR VS. REACT

So, Which is better: React Native or Swift?

Which one to pick when building your iOS app for the Apple products? To find the answer, let’s look at the following cases: 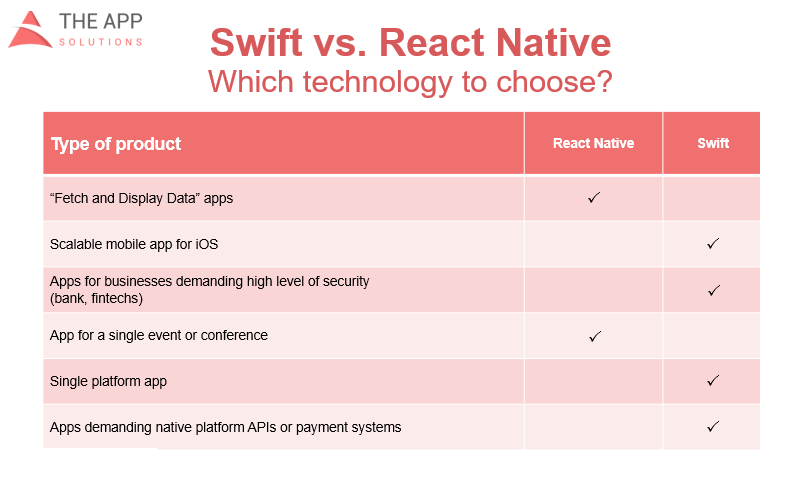 Both Swift and React Native are powerful solutions for app development. However, the choice between Swift or React Native app depends on your project type:

Go Swift if you:

Need advice on which platform you should invest in?

Drop us a line