To refactor code or not to—that is the decision developers and project managers struggle with throughout their careers. While most developers do understand the importance of code refactoring, most clients and managers don't. And this is where the dilemma kicks in.

From a developer's perspective, refactoring is non-negotiable. It simplifies the code, improves readability, and makes it easy to maintain in the long run. Consider it a software upgrade, however, one that doesn't improve functional features but internal ones such as scalability, maintainability, security, and sometimes performance. The goal is to make the code simpler and cleaner while system functionality remains the same.

But that's the problem. Why should the company invest more time and money in a process that doesn't make the code run faster or add new features? Project managers, product owners, business analysts, clients, and various other stakeholders don't get it. And even if the developer tries to explain the merits and benefits of clean code, they still don't see how it will benefit their business. Their focus is on time and cost.

What does refactor mean in coding?

First, let's be clear on what code refactoring means. Put, this is the process of restructuring a program's source code without changing its normal function. The restructuring improves the structure, design, scalability and enhances performance, making it less complicated. This, in turn, enhances the readability and maintainability of the code. A code after refactoring is more expressive and cleaner. In addition to these perks, refactoring may improve the design and performance of the program.

Although code refactoring might seem like something that only serves developers, it also benefits the business in several ways. Consider it a long-term business investment. While it doesn't yield fruit today, it saves the business from paying an enormous technical debt in the future. Technical or code debt is simply a metaphor, coined by Ward Cunningham, reflecting the total costs of reworking the code in your program due to taking shortcuts earlier during the development.

When should you refactor the code?

Refactoring should be performed promptly to prevent an increase in technical debt. The person who makes the call for refactoring is the developer or a tech lead responsible for reviewing the code. These individuals should immediately call for action whenever they notice a 'code smell' in the project.

According to Martin Fowler, a code smell in software development is a surface indication that is part of a bigger problem within the system. Put differently, it is the weaknesses in a code design that increases the risks of bugs & crashes in the future.

Below are the common indicators developers use to know when it's time to refactor code. Refactoring is immediately executed when:

Programmers may decide not to refactor if the code is a "clean code," i.e., with:

In his book Refactoring, Martin expresses how it is also common to refactor every time new features are added. Alternatively, the project can best be refactored after it has been deployed, i.e., after testing its performance and productivity on current users. Refactoring after the client is happy with the product's functionality enables developers to have unsupervised time for "housekeeping" the source code.

The reason why many programmers fail to write clean code is less related to technical challenges than it is to aspects of their work environment. The first factor to consider here is time management. Developers may not have ample time to finish the assigned project. It may be difficult to write a clean code when the client, teammates, or managers apply pressure to get the work done before a specific tight deadline. Write a clean code will require supportive management.

The second factor may be the developer's incapacity to prioritize refactoring. Often, the client may not give the developer a chance to remove the "code smell." After adding a new feature that has been tested and confirmed to work, the developer will be instantly moved to the next task. The third factor for not writing a clean code can result from the developer not understanding the problem. It's not uncommon for programmers to start coding solutions blindly. Eventually, the coder may get the work done, but their code may not be easily readable. This can be avoided if the developer is not working with their client or management adding pressure.

As mentioned earlier, technical debt is a term that was coined by software developer Ward Cunningham, one of the authors of Agile Manifesto and the creator of the wiki. The tech world uses the term to describe the coding that a programmer has to do tomorrow because they made shortcuts to deliver it today. This will see more resources and time is needed to re-do the work.

Refactoring is one activity that effectively minimizes technical debt. It does so by reducing the accumulation of dirt during the software development process. If the code is clean and well-designed, there won't be a demand for technical support in the future. The client is less likely to complain about performance and quality issues. Bugs and software crashes are often more associated with messy codes.

Does core refactoring have a business value?

Yes. Core refactoring is undeniably beneficial for business. Here is why. When an existing code is refined (refactored), the client will save money that will otherwise be required for technical support. A code that's not refactored has increased technical debt and, thus, higher chances of developing performance issues.

Core refactoring begins with the core functions such as user management, authorization, billing, etc. What follows is the cleansing of features that directly impact business, such as catalogs, analytic systems, suggestion systems & other relevant functions. When the core of the code is enhanced, both its existing & future functionalities are improved. Regarding the future, it may be easier to add more features that the business will require as it grows.

Other than the benefit of cost and readiness for the addition of new program features, code refactoring may add business value by reducing risk. It's easy for the developer to perform security tests by reverse-engineering the code. This reveals any vulnerabilities that hackers may exploit when launching attacks. When code weaknesses are known, the developer can quickly fix them, even while the program is in use.

When should you consider software refactoring?

Many things will call for refactoring software. Adding to the previously mentioned points, The APP Solutions will act on refactoring as soon as the developers observe bugs in a project. Additionally, they will take action when it takes longer to incorporate new features in the software.

It's best to refactor code whenever an update or functionality is added to an existing code as a general rule. When programmers take time to clean their code, it enhances the code quality and enables third-party programmers to build on the source code quickly.

Other than waiting for when a new feature has to be added or when the code begins to show some signs of dirt, developers can schedule times for refactorings. This approach is practical since the developer will be in no hurry to do other things, like writing new codes. They have enough time to optimize existing codes by doing clean-ups, or focusing on improving their readability, or adding appropriate variable names.

Whenever a dedicated refactoring period is set, it should be accompanied by frequent testing. Without testing, it's easy to mess up the code and start new problems that will grossly affect the product's functionality.

At The APP Solutions, we do things differently, and it shows in our results.

Once a new project is on board, we gather all the project requirements and discuss every detail with the client team. We encourage open communication to understand the functionality and other possible nitty-gritty the client desires for their project. For this purpose, we have the Inception phase. 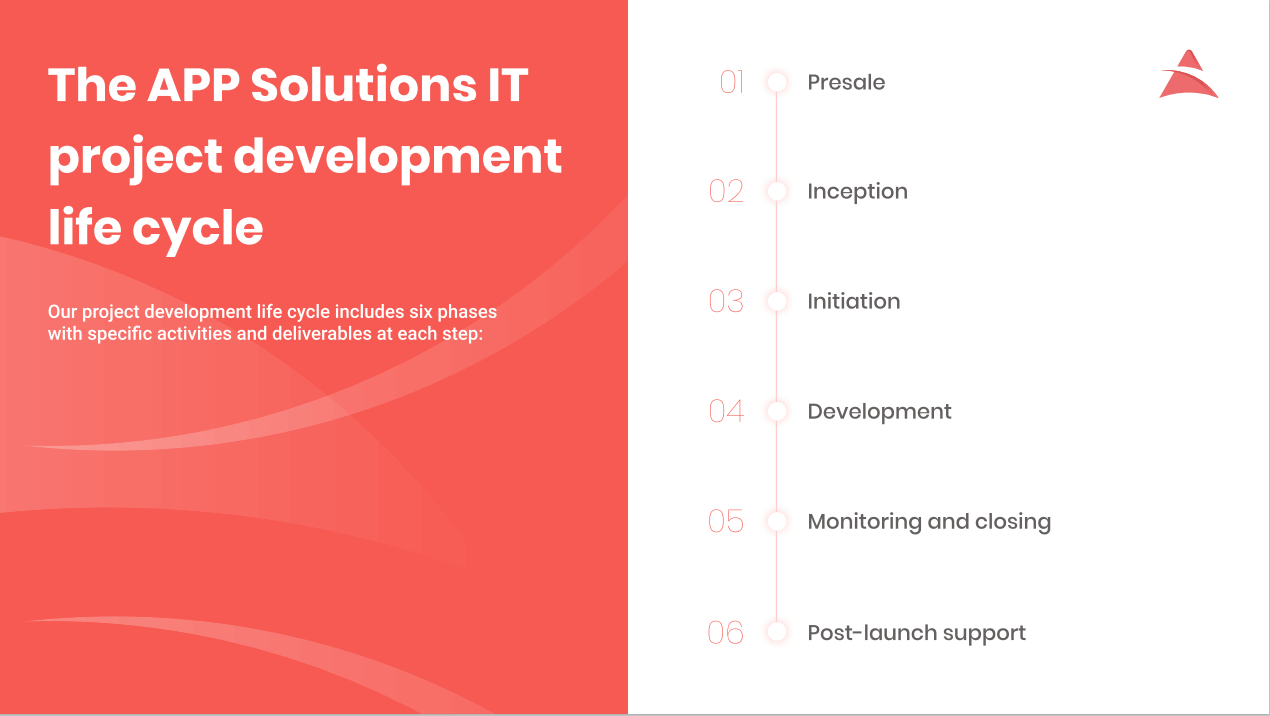 The team then divides the project scope into several stages and implements small features while having a long-term project roadmap in mind. In this way, the development team eliminates the need for code refactoring.

Below are the five steps that The APP Solutions will follow in refactoring code:

The APP Solutions prefers to start by applying a series of tests before refactoring. This ensures that the changes that follow won't create defects in the code. Several other tests, such as integration tests, unit tests, and component tests, can be written if the design allows. Any test that is written will cover only the part of the code that will be changed.

Tests on the project are essential as they help to characterize the existing code. They make it easier for developers to quickly understand if they are on the right path & keep documentation for the process.

Before making any changes to the code structure, The APP Solutions will consider the project's future. The project managers will think of potential new features that the client might want to add later. Whatever comes to mind, they will analyze how those may affect the refactored code.

The Solution Architecture will come up with the project architecture, considering the decisions made in step 2. After this point, the actual work of code refactoring (improving) processes can begin.

The code will go through changes associated with restructuring and cleaning to improve its readability and maintainability. This is implemented without changing its external behavior. And also, it's done in line with the long-term vision of the project.

Some of the methods/ classes/ variables of refactoring that are employed are: inline, extract, encapsulate, rename, move & extract function, etc. Among these, the most popular are renames classes and renames methods, followed by the move method/class and then followed by the extract & inline methods. The team will use any of these classes or methods depending on their assessment of what works best.

There are two methods for running code tests. The first method involves using 'automated' tests. After successfully refactoring the code, automated tests are often carried out on the codebase. These include unit tests, component tests, integration tests, and acceptance tests. Even though some of the tests were written initially, they would need to be written one more time. If everything passes, it means the refactoring was a success. There won't be any special changes to the code and its external behavior. The second method, other than automated tests, is the use of manual tests. Manual tests can also be used after automated system tests for confirmation.

Any small change that occurs during the refactoring processes can be resolved on the spot. However, major issues will require a reset. Resetting is the best method to fix a procedure gone wrong without changing anything significant. Clients can be assured that even if challenges arise, The APP Solutions will always guarantee a successful refactoring process. A better product is guaranteed.

Want to Learn More About Our Approaches?

Code refactoring is a subject that has gained a lot of traction in the programming world. Refactoring also brought change regarding how coders perceive this subject. Both developers and project managers now have a better understanding of the issue.

The key takeaways regarding refactorings are:

CTO at The APP Solutions, with niche expertise in AI and ML. https://www.linkedin.com/in/kopaniev/

In this article, you will find answers to almost all questions, that you should ask before using a new database.

What is a light load, and why does it matter? The article tells about our approaches to high-load projects and architecture optimization.

Features prioritization is the first step the development team makes to the project MVP creation. Such a step requires project managers, business analysts, and clients to work closely together.