Kotlin vs. Java: What To Choose for an Android App?

To create Android applications, developers use either Java or Kotlin. When starting a new mobile project, you may wonder, "Should I build it on Java or use Kotlin instead?"

For me, as for the Android developer, the answer is obvious. For you, as for a person without a background in coding, the choice between those languages might not be so easy.

To draw you an overall picture, let me give you an example. When choosing between the old but gold Honda Accord and Tesla Model S, what would you select? I doubt you'll choose the first option. Similarly, the answer for "Java vs. Kotlin-question" is clear to developers, but not to all C-levels and decision-makers.

I have written this article to give you a clue why most developers use Kotlin for new Android projects, and when Java code can still exist in your mobile application.

But first, let's take a closer look at Java, Kotlin, and their main differences.

Java is an object-oriented language for programming, named after an island in the Indian ocean.

The first Java release was 25 years ago, in 1995. Since then, Java has become widely used in the community of developers. And there are several reasons for its popularity:

The following businesses are using Java in their products:

Now, let's find out why mobile app developers like and don’t like Java at the same time.

I think that the Java language is not so bad for the following reasons:

Platform agnostic. I can use Java, not only for coding Android apps but also for web and cross-platform applications.

Established community. When I have an issue with Java code, I'll find help in GitHub and Stack Overflow Java online communities.

Flexibility. I can build Java applications on Java Virtual Machine (JVM) and a browser window.

Code reusability. I can use Java code from one project in multiple apps that need it, which slightly reduces the development time.

Developers almost hate Java. Really. Reddit's thread "Why does everyone hate Java" includes 1700+ answers to this question. I find Java inconvenient for the following reasons:

Repetitive syntax. The code is drowned out in type declarations, temporary classes, and factories, which distracts me from fixing the actual problem.

Memory issues. The memory management happens through garbage collection, which slows down an app’s work.

Kotlin is a cross-platform statically typed programming language with open source code. The first release of Kotlin was in 2011 by JetBrains s.r.o., a Czech software development team.

It is 100% interoperable with Java code. The JVM version of Kotlin's standard library depends on Class Library written in Java. But, thanks to type inference, Kotlin syntax is more concise, which makes Kotlin the fourth most enjoyable language to use, says The annual Stack Overflow survey. 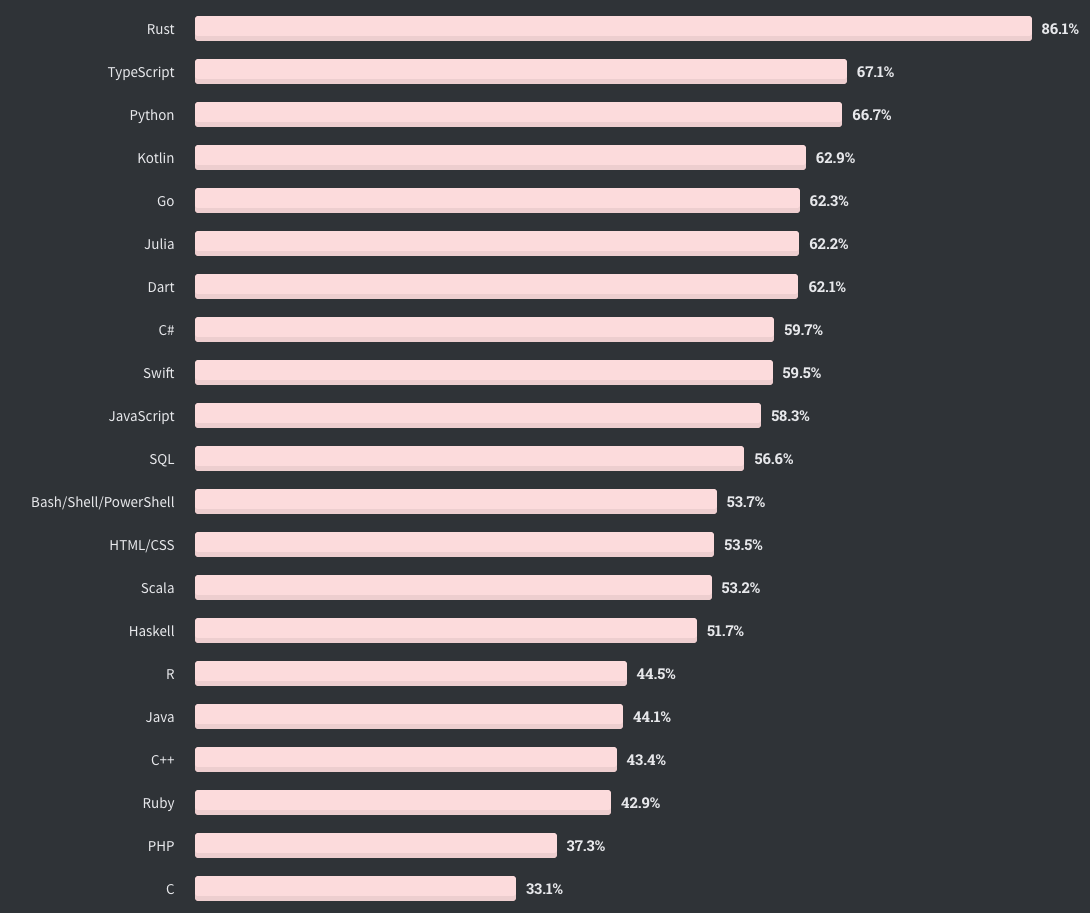 The following companies use Kotlin in their products already:

One example of the Hello world Kotlin program looks like this:

I find Kotlin the best language for Android app development due to:

Less code. When I write Kotlin code, I don't need to create constructors for object initialization, classes to hold data, update, and retrieve values for declared fields. As a result, Kotlin code is 10%-20% shorter than Java code, which speeds up the development and deployment processes. 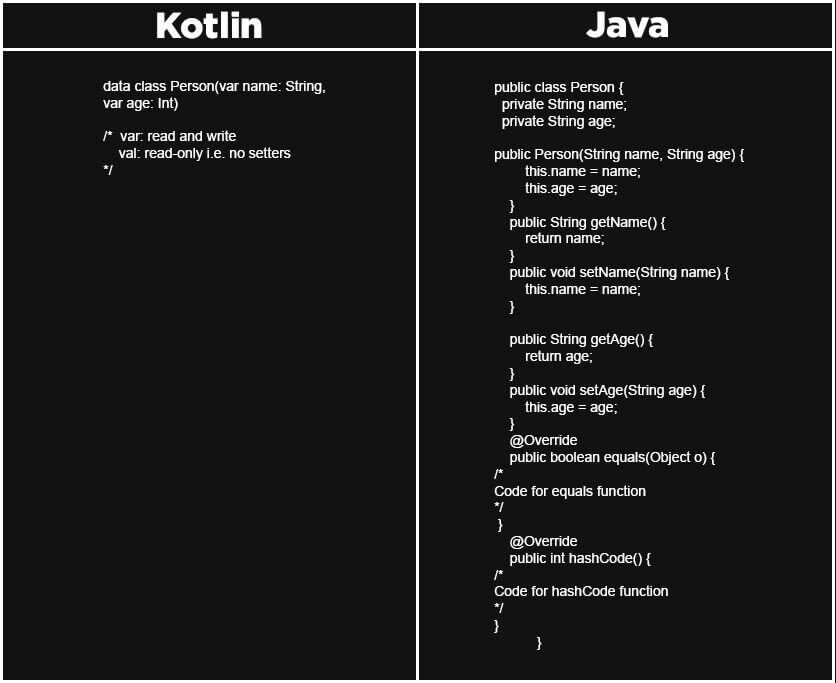 Simple in use. Kotlin eliminates Java-specific challenges, such as NullPointerException, and provides access to all frameworks and libraries written in Java for building clear and concise code.

Android Studio support. I use both Java and Kotlin code in the same project thanks to extended support and adaptation tools from Android Studio.

Like everything in this world, Kotlin isn't perfect. I find Kotlin adoption challenging for the following reasons:

Young community. In some cases, I can't find answers in online community groups dedicated to Kotlin. But, I hope developers will solve this issue by contributing to Kotlin projects on GitHub and participating in issue discussions in StackOverflow.

Now, let's compare how Java is different from Kotlin in terms of functionality.

In the table below, I included a detailed comparison of Java and Kotlin programming languages.

With that being said, developers find Kotlin a far more convenient programming language. Its syntax doesn’t require us to repeat the same code when writing a new one. Thus, the "Java vs. Kotlin" question hasn't arisen in the developer community in recent years. But, mobile app development isn't that simple in practice.

Before suggesting the relevant coding language for your project, I need to learn more about your business needs, expectations, and project goals. Moreover, there are even cases when I’ll recommend Java as the best option.

To understand why mobile app development isn't black and white, check out several examples from my experience.

How to Outsource App Development Without Failing

The Discovery Phase with The APP Solutions

Java vs. Kotlin: What programming language an Android developer recommends

You'll need an Android developer in several cases - to build Android applications from the ground up or add more advanced functionality to an existing application. Depending on the business case, the answer to the question "Java vs Kotlin?" varies.

Developing an Android application from scratch

Before recommending the best programming language for new Android applications, the first thing I do is clarifying project deadlines, in-house dev team composition, and the budget.

Tight deadlines, limited budget, and a small development team without previous experience in Kotlin are signs that you need to start your project with Java. From a business perspective, Android app development will cost you less. Since most mobile developers know Java, they can start the project at once. At the same time, you save time and budget on hiring Kotlin-experienced programmers.

But, in the case of having enough time before the project launch, extra budget, and time for hiring additional developers, I recommend using Kotlin.

Some clients ask us to use existing Java algorithms, features, and plugins for their projects. At the same time, they want the code to be written on Kotlin but have no budget for re-building Java functionality.

In this case, I recommend starting your project with Kotlin, then integrating Java pre-coded app functionality. This approach works because Kotlin is compiled with Java bytecode and JVM (Java Virtual Machine).

To call existing Java code from Kotlin, developers use the following command:

If your application was launched before 2017, I'm 99.99% sure it is written in Java. Now, you might need to integrate new business functionality. So, you’ll face the dilemma - to hire Android developers to re-write the app with Kotlin language or  integrate new functionality powered by Java? In both cases, the right answer is "no."

As I mentioned earlier, Java and Kotlin codes work together. Thus, re-building your application with Kotlin to receive a 100% Kotlin-written app doesn't make any sense. For adding new functionality, I suggest using Kotlin, since there are many examples of both programming languages co-existing in one mobile application.

One example is Passport Scan, the application we developed to streamline hotel check-in. The client challenged us with integrating a web application into an existing hotel management system, made with Java.

We began building the core features using Java. But soon, we switched to Kotlin for adding the new app's functionality. Learn more about the project by reading the Passport Scan case study.

Java vs Kotlin: What is the best language for Android app developers

Kotlin programming language addresses Java's weak points - in syntax and memory usage, as well as other imperfections. And Kotlin is doing it well. The growing community of Kotlin developers proves that when a developer learns Kotlin, one will never write on Java again.

Kotlin-built projects take less time to code, require fewer bugs to fix, and cost less, compared with Java applications. In contrast, developers can write a new mobile application in the Java language as an exception to the rule.

If you have an idea for a Kotlin project and are looking for well-performing developers, drop us several lines. Let us know your idea, and we'll figure out how we can be useful.

In this article, we will review Google Cloud services which could help you build great Big Data applications.

Read about emerging technologies in the supply chain and logistics industries and the benefits of developing a logistics software, its main functions, and components.

In this article, you will find answers to almost all questions, that you should ask before using a new database.