Remember those times when the only source of music was CD collections, and if you wanted to listen to something new, you needed to buy a new CD or exchange it with your classmates? Now, thanks to music apps such as Spotify and Apple Music, you have access to any track by any singer available on the Internet.  As well as this, those apps created new standards for music applications – they should be fast, consume fewer resources, and deliver tracks to users in a matter of clicks. Also, there are different types of music apps- streaming, store, and storage apps. And, if you consider developing a music application, you need to choose the app type and examine its main features. This article will guide you through the process of music app development.

1. Choose your Type of Music App

While we use music apps, we don't realize how many kinds of music apps exist on the market. But if you want to create your own music app, you need to choose among:

Let's look at them one by one.

Such apps as Soundcloud, Spotify, and Apple Music are the most widely used music streaming apps. The primary purpose of the  streaming application is to play music available in the databases of the service, compose custom playlists and suggest similar songs. The main elements of music streaming apps are:

When developing your music app, consider the following requirements for music streaming services:

As well as this, you can also integrate a ready-made solution, such as Spotify API to an existing app to give users a unique experience, as we did for the Spotnews project. The idea behind Spotnews is to help users be aware of the latest news while listening to their favorite music on Spotify. For Spotnews, we used Spotify SDK to allow users to authorize the app via their existing Spotify account. To learn more, read the full case study.

[SpotNews app by The APP Solutions]

Music Store Applications are an elaboration on the music streaming services with a more prominent commercial trading element in their service. Applications like Pandora, GarageBand, and YouTube Music belong to this niche. The main features of music store apps are:

To build a music store app, consider the following requirements:

Music Storage Applications are music players like Amazon and Google Music. Such apps are plugged straight into your storage, which might be the phone's internal storage or general cloud storage. In a way, you can make your own music player - fully curated by the user. The main music player app development characteristics are:

How to make a music player app? To achieve that, you need:

2. Select the main features for the music app

If you are looking for ideas on how to make a music app, consider the list of main music app features below.

Other Features to consider

You might consider this list for the second development stage of your app when the time comes to improve your app with additional features.

High performance. As the critical features of leading services are almost the same, the app's performance may become the deciding point. The app needs to present good speed and less resource consumption. It should take less than 300ms for the music to start playing from the moment a listener has selected a song.

Bitrates. To stream music, it should be digitized, i.e., broken down into a series of audio snapshots. Then, our brains interpret all these snapshots together as a continuous sound. The quality of streaming music is called bitrate. There are three different audio qualities available for mobile apps:

High-resolution sound aims to give you CD-like, or better than CD-sound, in a convenient package of streaming from your phone or as a digital file on a dedicated player.

Recommendations. After your app becomes popular amount users, you can invest in developing more advanced discovery and recommendation systems. To build such a system, you can apply different approaches:

How much does it cost to develop a music app? Unfortunately, there is no one-size-fits-all answer. The price of music app development depends on many factors, such as the number of platforms, developer experience, the number of third-party integrations, and others. Our advice at this stage is to consider developing an app MVP to validate your business idea and find out whether your product would be popular among users.

Find the MVP estimation in the hours below.

To make your own music app for iPhone and other devices profitable, you can apply the following monetization models:

Running ads is a traditional way to monetize a freemium music application. For running ads on your app you can charge the following costs:

Advertising and subscriptions are quite popular revenue models for music streaming apps such as Spotify and Pandora. Find the revenue these music apps receive from subscriptions and advertisements below. 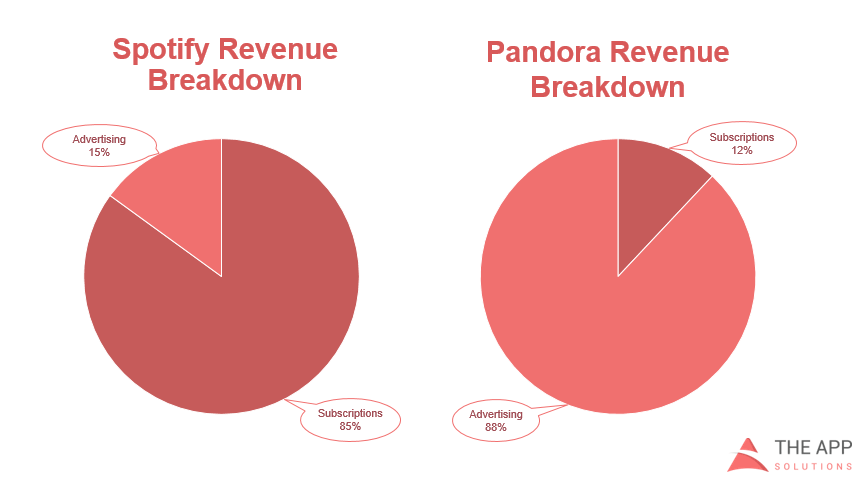 [Revenue for Spotify and Pandora from ads and subscriptions]

Apart from the traditional methods of music app monetization, you can consider the following:

So, how to make your own music app? Firstly, select the type of music app you want to build. Consider that each type of music app has its own characteristics and features. Secondly, develop the app MVP to find out whether your app would be popular among users. And don't forget – social experience is always welcome. Use the tips from this article and your app will have all the chances to become noticeable by users.

HOW TO DEVELOP A SHOPPING MOBILE APP LIKE WISH?

HOW TO CREATE YOUR APP

HOW TO ESTIMATE BASIC EXPENSES FOR YOUR MOBILE APP DEVELOPMENT