Everyone likes music. The tempo of life is getting faster and faster.  Often there's no time to go through an entire list of music tracks and purchase the ones you like. Fortunately, audio streaming applications have changed the way we listen to music.

With modern technologies, we get an effortless user experience and receive music in a matter of clicks. Mobile devices and a stellar speed Internet connection only complement this trend.

Choose a team that will build an app like Spotify for you. There are a lot of factors for you to consider. You also should check the portfolio of your music application development company.

Now, you and your development team should agree on how the future app will look. For that, you need to create an app Wireframe, Mockup, and Prototype.

At this stage, you will decide on your MVP (minimum viable product), and all the other details with your development team and you are ready to go.

HOW TO CREATE VIDEO SOCIAL MEDIA APP LIKE TIKTOK

What's more, people globally shift to their mobile devices to do pretty much anything. Phone calls only use a fraction of the time people spend on their cell phones.

Build Your Own Dedicated Team

But there is more! 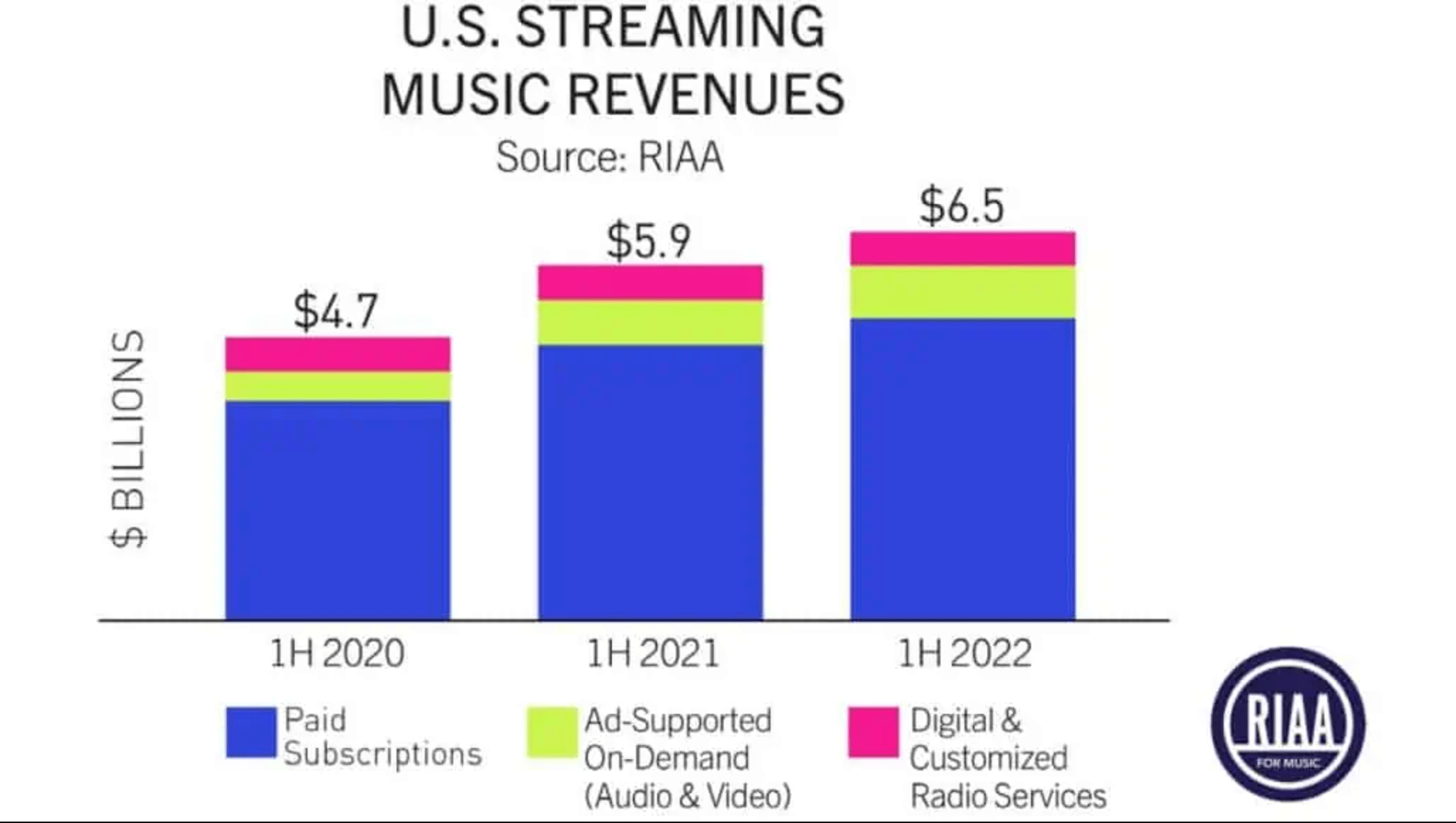 Did I mention that 72% of Spotify users are millennials, who, it seems, were born with mobiles in their hands?

Driven by advantageous technologies, the music streaming industry continues to grow. Therefore, the development of your live audio streaming app might be a great idea.

There are three leaders in the sound streaming market, including

Now, let us take a closer look at each of them. 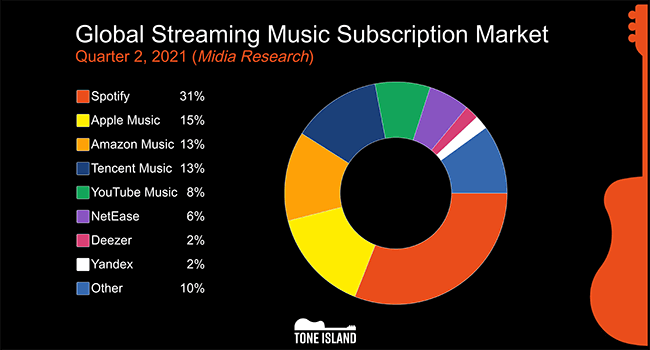 Being a pioneer in the music-streaming market, Spotify is the best-known music app. The app has 109 million premium subscribers and 232 million monthly active users.

App users receive access to different music services. They include Discover Weekly playlists and experimental ones, like the Australia-only station.

Apple Music is the second most popular music streaming app. It provides users with plenty of features and a discount for families and students. In June 2019, Apple Music had over 60 million paid subscribers, and 50 million songs in the library. All Apple devices, including Apple HomePod, are compatible with this app. Still, unlike Spotify, the app does not have robust sharing options.

Amazon Music is an advanced version of Amazon Prime Music, provided to Prime subscribers for free. For an extra payment, users receive access to an expanded catalog. Amazon Music recommends playlists grouped around artists the user already listened to. Also, the app shows the song lyrics on the "now playing" screen.

To conclude, Spotify is not alone in this online music thing. Other significant players are Apple Music and Amazon Music.

All music streaming services have a lot of benefits, including:

As you can see, all these services appear to be outstanding because of these common features- they are effortless, intuitive, and easy to use.

The Killer Idea Behind Spotify

To give you a clear idea of how to start a music streaming service, let's discover the inner logic behind Spotify.

This concept is more effective than hitting servers with requests to download the track. At the same time, you become an essential link for the global social music sharing network, which is engaging too. And, it enables users to listen to all this music legally by paying royalties to authors.

Now, let's learn how to build a music streaming app and make it profitable.

How to Make Money with a Spotify-Like App 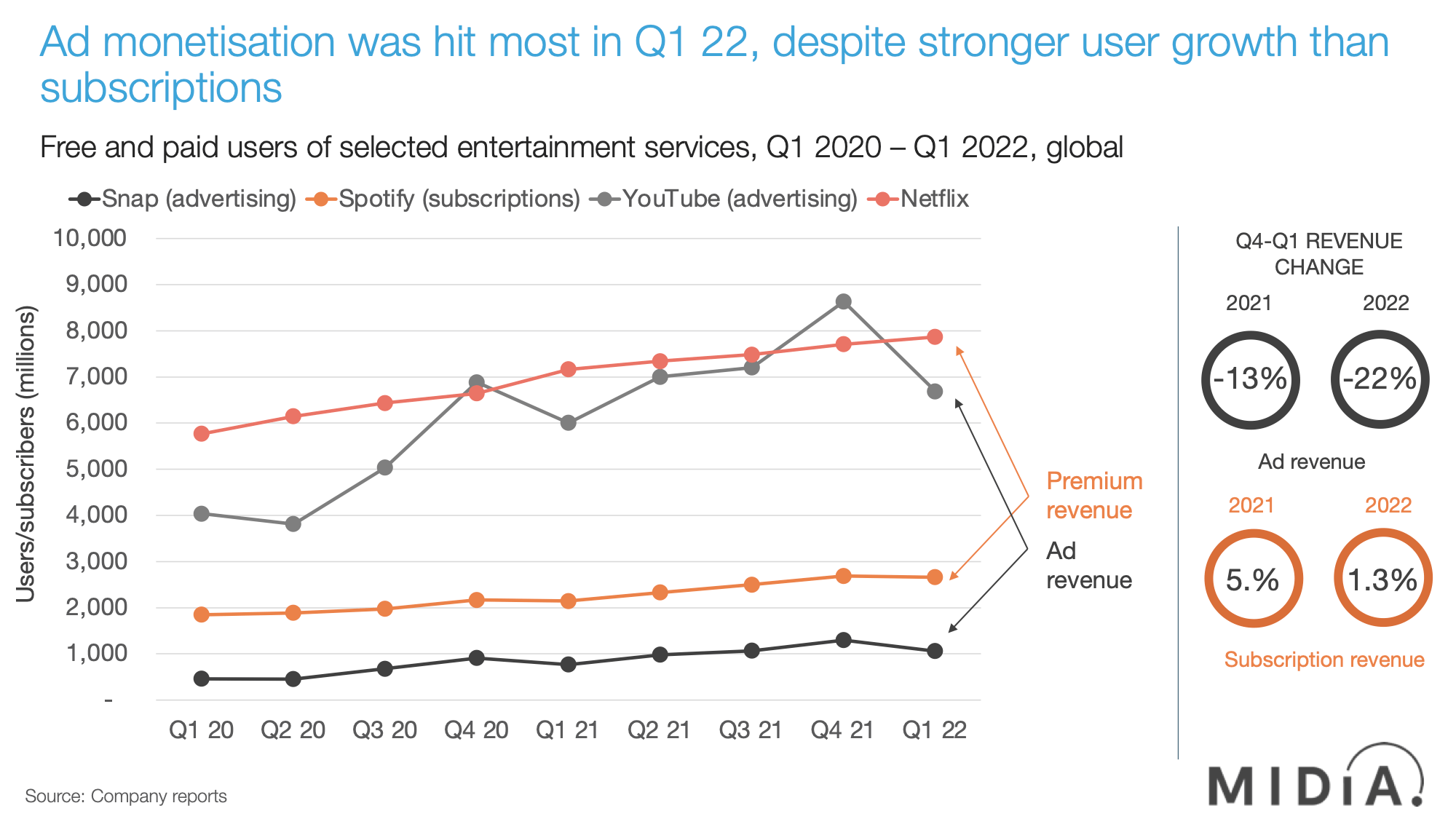 The premium Spotify account provides users with free access to unlimited music across other devices. Besides, the app allows the temporary downloading of songs for offline access and plays the highest quality music. There are several types of paid plans, including: 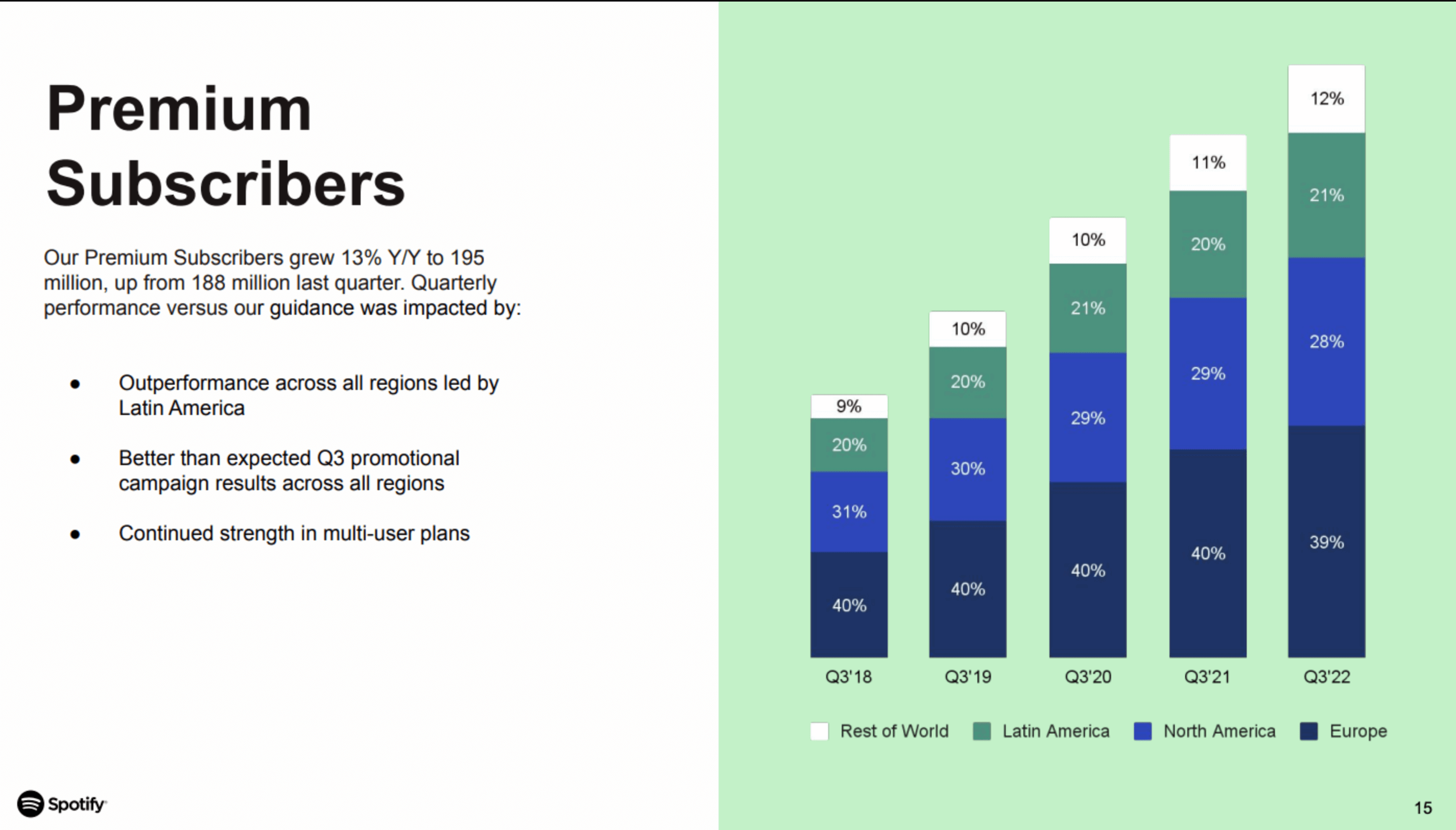 App users with a free account can listen to a limited among of songs on demand, which may be interrupted by an advertisement. By using this business model, Spotify charges advertisers a cost-per-click and cost per mile fee.

According to their site, Spotify spends a significant chunk of money to pay royalty rewards to artists. 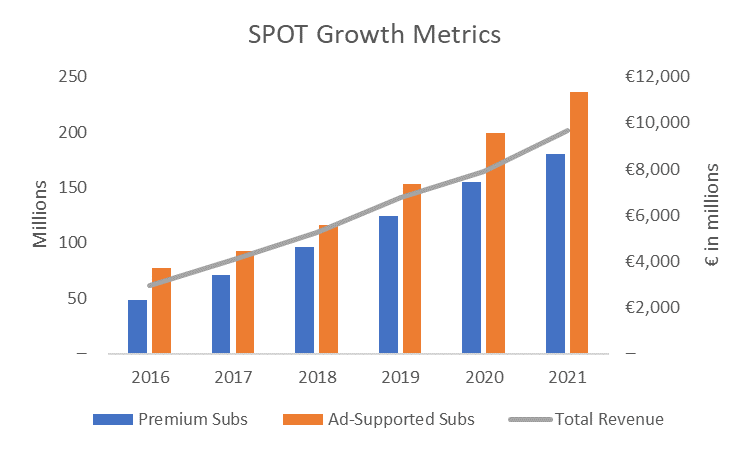 This concludes how to earn with your Spotify clone. You have to become a part of "back to paid music" preachers, deal with authors and provide your users with a good deal of music value for their membership.

Critical Features to Include in a Spotify-Like App

If you are looking for ideas on how to make an app like Spotify, consider the following app features:

First, a user should be authorized to use your system. Users can register in Spotify via email or social media like Facebook.

Make sure you take this step very effortless for users. Connect it to social media and you get new subscribers in a matter of taps. 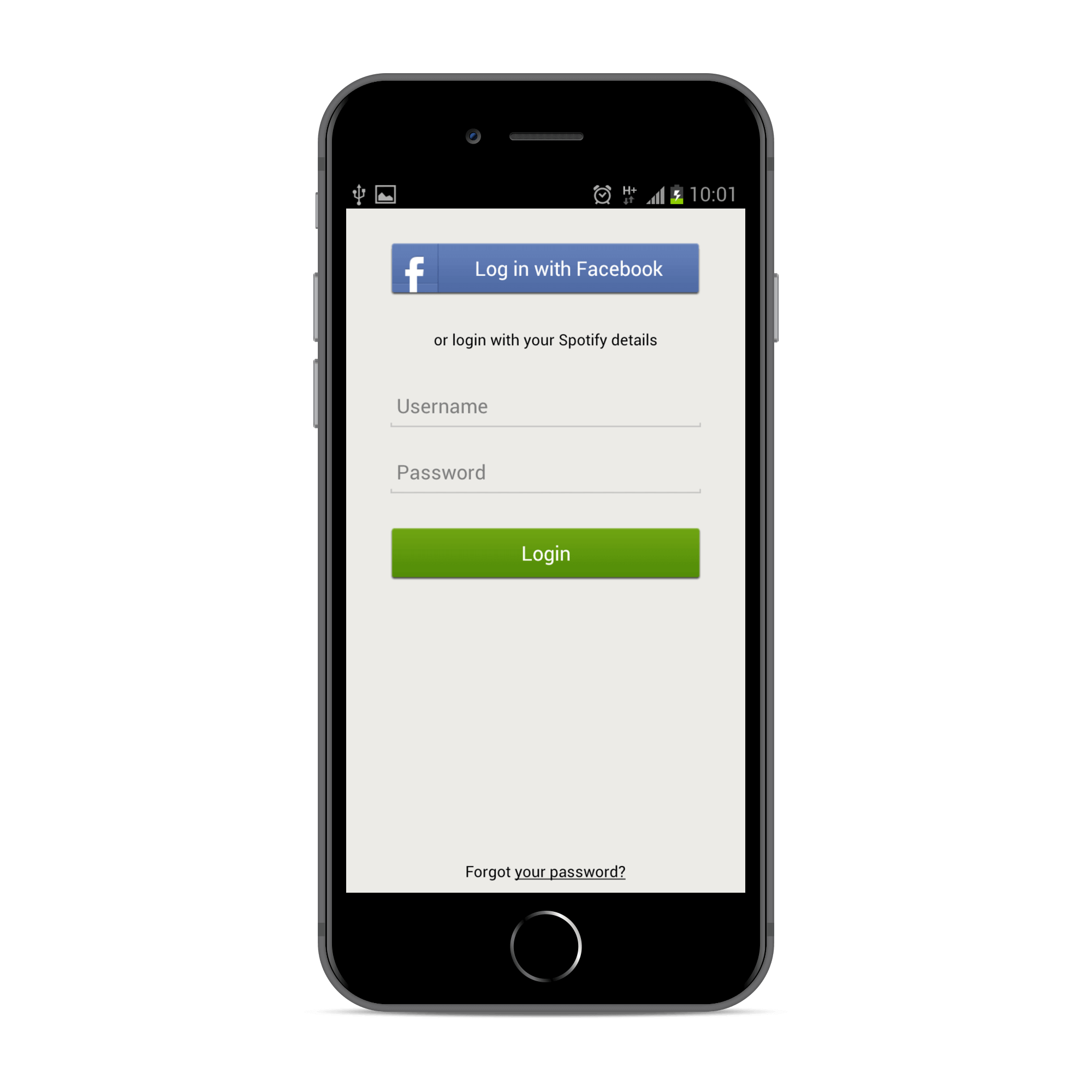 The app should provide features of grouping one's music, etc.

So, users can create playlists for different purposes, like current activities and genres.

To motivate users to engage with your app more often, you need to provide them with personalized content. And here is where Spotify has a great competitive advantage over other services.

Let us check how it works.

This feature allows users to share songs with friends and highlight favorite tracks on a social feed. It's also going to serve your app with a good deal of word-of-mouth advertising at the same time. 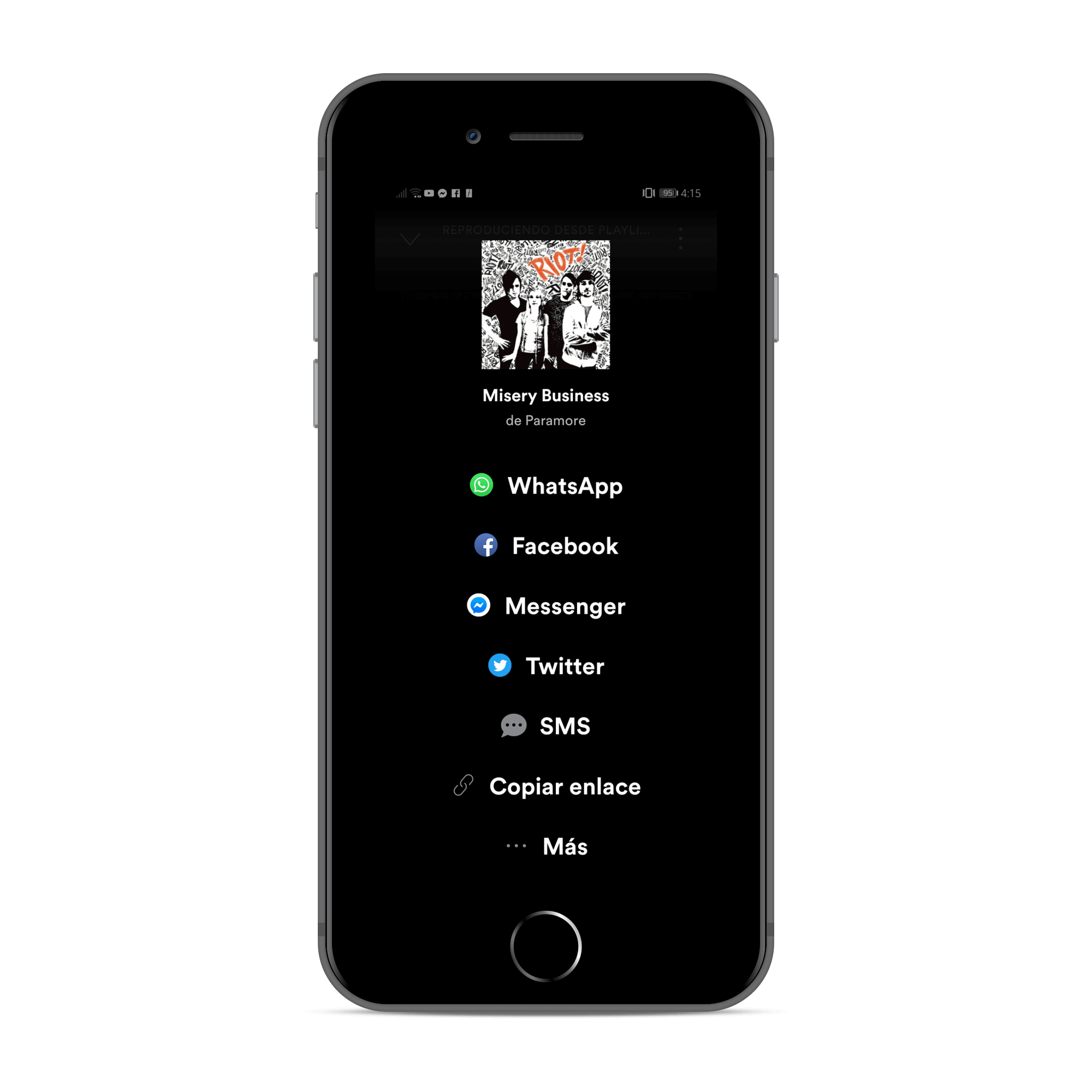 How To Develop a Social Media App?

Push notification is a deciding feature for such a social community based on follow-ups and spreading content. People want news from their favorite sources; that's how it works now - users wish to have valuable personalized benefits from your service.

Unfortunately, this feature is absent in Spotify. Because of this, users can not host or upload their tracks and create a music library. The only option is to create personal playlists and subscribe to music channels created by other users.

At the same time, this feature is available in Apple Music. It allows users to add and synchronize songs on their devices and in-app playlists. Users can store a certain amount of songs on their app for free or upgrade to a premium plan.

To give you a clue of how to make a music app, and even better app than Spotify, consider this function as well.

Now, let's find out, how to build a music app.

Where to Start: Your Guide to Making a Music App like Spotify

For music app development, you need to specify the whole concept of the app.  In order to do this, find a similar application, and of course, think of something that makes your app special.

When developing a music streaming service, you need to get a license to provide your subscribers with legal audio content.

As for Spotify, the platform has two types of licenses for music distribution, such as:

When looking for an answer on how to make your own music app, do not forget to get such a license.

Now it's time to come to the actual work and choose a team that will build an app like Spotify for you. There are a lot of factors for you to consider. To estimate how much it costs to develop a music app like Spotify, check developer rates among regions:

You also should check the portfolio of your music application development company.  From the beginning, communicate with your team to make sure you're on the same track. At the APP Solutions, we usually hold meetings with our clients on a regular basis via Skype.

This market has significant potential, but that's not enough to run and spend all you have for a killer application. You need to run a study and learn about your target audiences' preferences. Then, communicate your business idea to your development team. The team will come up with some technological solutions, cost estimation, and project requirements.

Now, you and your development team should agree on how the future app will look. Here, you can offer the design team some ideas, if you have them.

The necessary process of the music app design creating includes the following stages.

To develop your Spotify-like app, consider Spotify developer tools, like Python and JavaScript. Besides, Spotify uses PHP for the server-side and Java for the back-end structure. As we said, Spotify stores all the music files on the device cache. For this, use Cassandra, PostgreSQL, as well as a general memory caching system.

When looking for a clue on how to create a music streaming service, take into account that Spotify uses the following technologies:

You can empower your app with Spotify players by integrating Spotify player SDK. This library contains classes to stream management and audio playback. It takes on all the negotiation with Spotify's back-end, digital rights management, and decoding.

We did such integration for our recent project, SpotNews. SpotNews is an audio streaming platform that provides personalized music content. The idea behind the app is to allow users to listen to their favorite songs while reading the news sections.

At this stage, you will decide on your MVP (minimum viable product), and all the other details with your development team and you are ready to go.

When looking for ideas on how to create a music app, consider the following features for your music streaming app MVP:

The average development cost of a music streaming app like Spotify is about $40-50K per platform.

For a more detailed estimation, you can use our project cost calculator. Now you know how to create a music app like Spotify.

Take it to the test

After the application is ready, the team does in-depth testing to ensure the app runs smoothly. We usually implement it right after the app is prepared and approved. Plus, three months after release our developers can fix any issues occurred for free.

The music streaming app market is growing, and its revenue is expected to reach $17.50 Billion by 2025.

Spotify is the leader among music streaming apps. It uses a raft of modern technologies to provide users with relevant music content.

But, to achieve success with your app, and be ahead of competitors, you need to get started asap.

The last thing that remains is to find a development team. And we are here to help.

How-To
Agile Healthcare: How to Implement the Approach

Healthcare organizations can accelerate the introduction of new ideas and learning through the following key elements derived from Agile principles.

How technologies can protect healthcare organizations? Security strategies to save patient privacy.

How-To
How to Start a Neobank