Imagine you're a college student who develops a photo messaging app with your frat buddies. Everybody says that it's a terrible idea.

But several years later, Facebook or Google offer you from $3 to $4 billion to buy it, but you reject the offer. In another three years, your company is worth $20 billion. It might seem like a dream, but it's a true story.

This is the success story of Snapchat, a mobile messenger with text, photo and video content that disappears a few seconds after it is received. Snapchat's success inspires a lot of entrepreneurs, and we receive a lot of requests to estimate the cost to build an app like Snapchat.

So, if you want to create a similar app, read on. In this article, you will learn how to create Snapchat and the estimated development cost.

HOW TO CREATE VIDEO SOCIAL MEDIA APP LIKE TIKTOK

Currently, there are numerous social media platforms. However, the latest statistics show us that Snapchat is the leading social media network in the United States and France.

Snapchat copy app might be a good idea for a startup. You can create a Snapchat clone, add some new features, and get  a slice of the action. Just have a look at Snapchat's stats below:

But there is more:

From the beginning, Snapchat owners didn't care about making money. But later, the app provided several ways of generating revenue.

As we can see, the Snapchat multimedia messaging app is very popular among users and generates significant revenue.

How to Make an App Similar to Snapchat in 7 steps

The main goal of this stage is to find out the functional and non-functional requirements for the future project, estimate the project budget, and business needs.

During this stage, business analysts and project managers prepare the project's specifications, user stories, and other project-related documents that describe how your app will perform.

Then, the mobile development team creates prototypes of your future app scenes and user journey and sends it to you for further improvement.

Based on the screen prototype, the design team develops the design for your app.

When the design is ready, the mobile development team integrates all the necessary features to your app. As the development stage moves forward, your Snapchat-like app developer might clarify specific requirements toward the project's functionality.

The quality assurance team conducts tests to ensure that the application is bug-free.

When the messenger like Snapchat is ready, the team will deploy it to the workspace.

HIRING A DEVELOPER FOR YOUR BUSINESS: A SIX STEPS GUIDE

So, to generate revenue, Snapchat uses:

Branded GeoFilters. Depending on the geolocation, users can access fun augmented reality filters that stay available for 30 days. The app charges businesses $5 for coverage of 20,000 square feet.

Sponsored Lenses. This monetization strategy is similar to Geofilters. Businesses advertise through their own customized lenses that appear in particular locations. In this way, they can promote their brands or events. This ad type is popular among big companies.

OUTSTAFFING VS. OUTSOURCING VS. MANAGED SERVICES: DIFFERENCES AND BENEFITS

A collaboration with KFC. When visiting KFC,  app users revive access to the Colonel Sanders lens filter, which turns users into the white-maned colonel himself.

The "Discover" section. The app place promotion content in the Discover section. The Snapchat live story costs $0.15 per view. Currently, the app is partnering with around 20 big-name publishers, such as CNN, Cosmopolitan, and People.

In-app purchases. App users can buy additional features such as Re-play to a feed such as a picture or a video that the user has already seen.

Now that you are aware of Snapchat's monetization strategies, move on, and find out the app's core feature set to make an app like Snapchat.

HOW TO OUTSOURCE MOBILE APP DEVELOPMENT

When you heard about Snapchat a few years ago, it was a simple messaging app with the primary feature of vanishing messages in one to 10 seconds. But, over time, it has added a vast amount of new incredible features that provide more immersive interaction with the app.

In other words, Snapchat gradually evolved into a mix of private messaging and public content, including brand networks, video-sharing, and live events. Moreover, Snapchat expanded its capabilities and became a multi-entertainment app, transforming from a messaging platform into a media giant with 10 billion video views per day, Bloomberg has reported.

How To Build a Mobile App With Geolocation

Memories are one of the features that provide a new way to save Snaps and Stories on Snapchat. Users can create new Stories from Snaps they've taken, or even combine different Stories into a more extended narrative.

Also, Snapchat has launched some new features, including new photo and video filters, the capability to add emoji stickers to videos, and changes in chat.

Snapchat has added additional value to such a simple thing as chatting, providing it with a set of amazing features.

In Snapchat, app Users can create multimedia chats called "snaps." These snaps can comprise of a photo or short video; they can be edited with filters and effects, text captions, and drawings. In the Chat 2.0 recent update, you can send audio notes, make video and audio calls. Snaps can be directed privately to selected contacts, or a semi-public "Story." These personally posted messages can be self-destructed automatically after a few seconds.

Also, the app allows location sharing. When the user starts typing an address into chat, it displays a card that links to the Google or Apple Maps app. 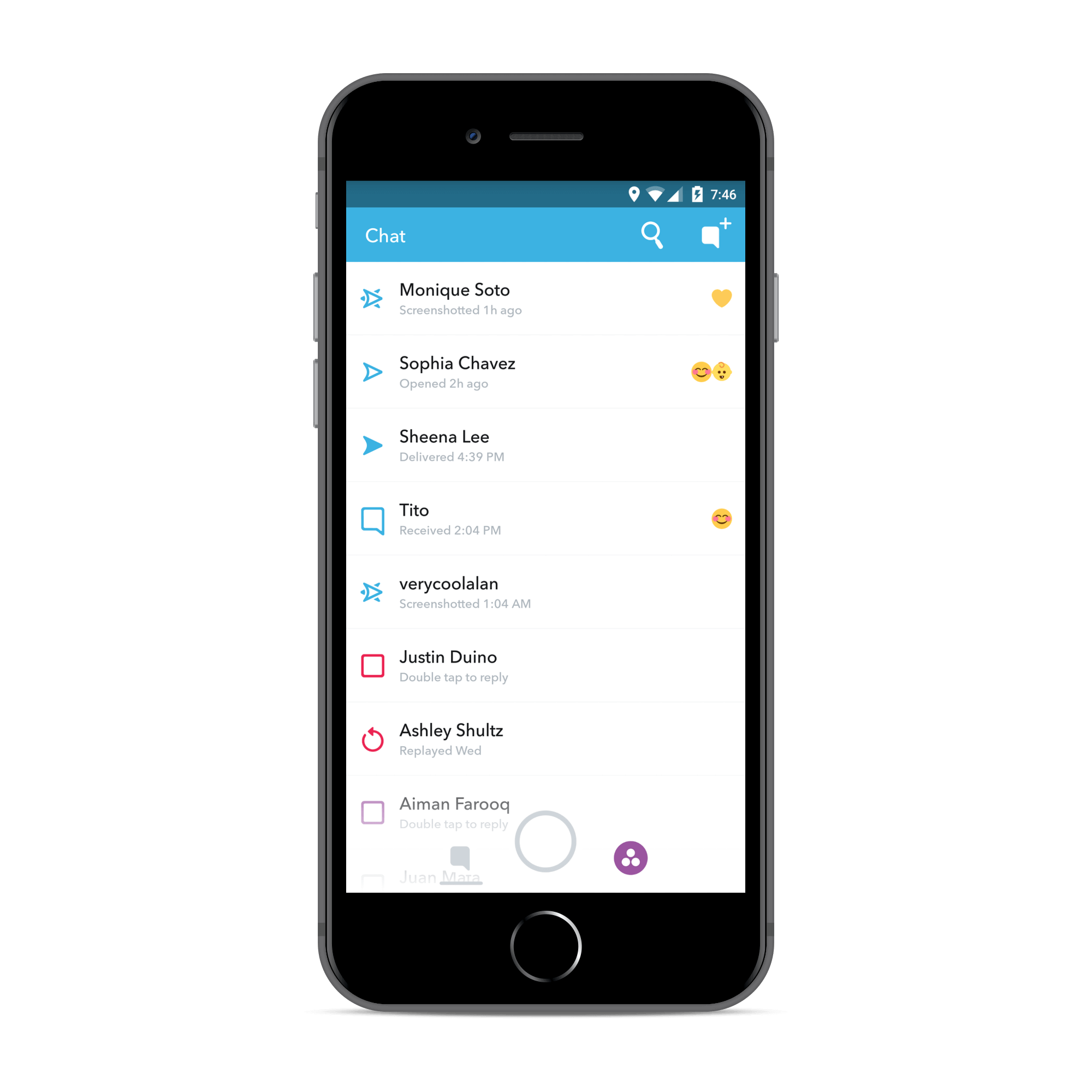 Self-destructing messages are a custom feature of Snapchat and one of the things that made it so popular among teenagers.

Before you create custom features, you need to develop a messenger app. Answering the question "How to make a messenger app?" we recommend using the ready-made solutions as a basis for your future product to save you money and time.

But how does it work?

WHAT TECH STACK TO CHOOSE FOR YOUR PROJECT

Stickers have become an inevitable part of modern communication. Snapchat contains 200 stickers built into its app. You can use a custom solution (design your stickers) or use a ready-made solution that is much cheaper. 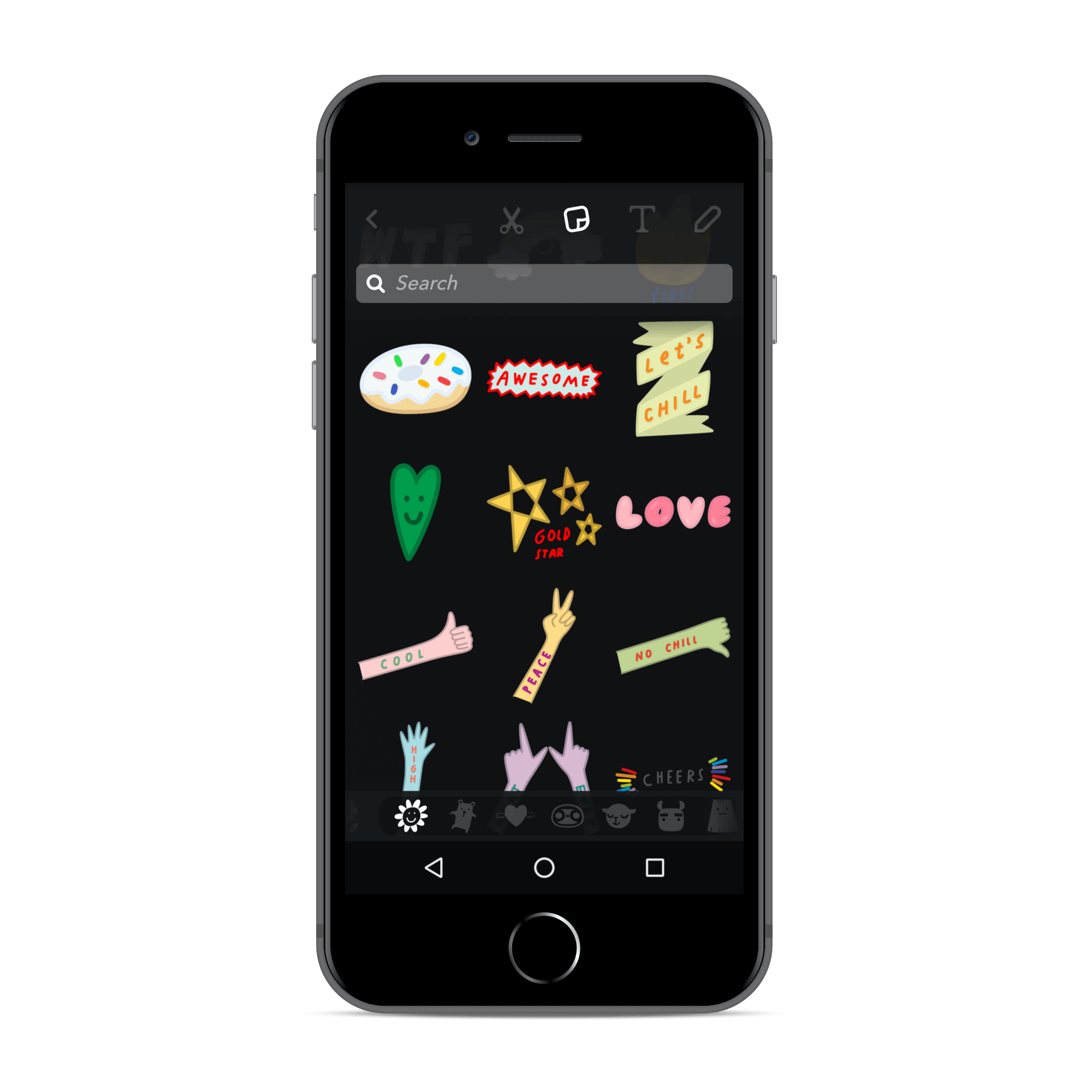 By using this feature, Snapchat users can share their location with friends or other users. Their site will appear on Snap Map. App users can also choose who can see their place or update it only when they have Snapchat open.

It is an essential function of a social media app. Besides the standard methods of adding friends via usernames and phone contacts, Snapchat provides some smart ways: 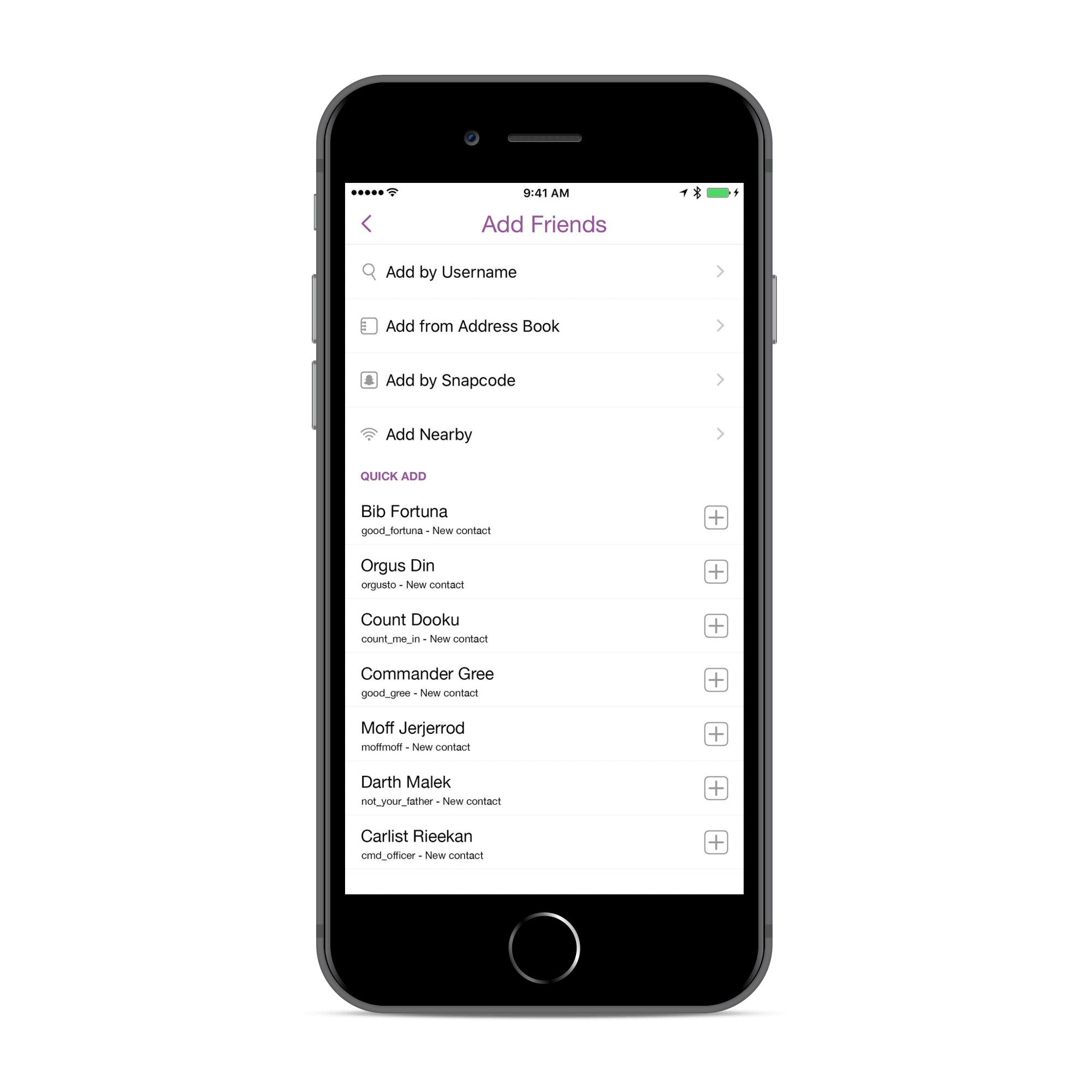 In the updated version of the chat,  app users can start talking or video chatting instantly with one tap. If the recipient isn't online, you can send an audio note.

This feature turns Snapchat into a phone alternative and brings it close to Facebook Messenger and Whatsapp.

Get a Free Estimation

A feature, known as "Geofilters" is a unique graphical overlay that is available when the user is within a precise geographical location, such as a city, event, or destination.

To allow your users to mark their location on the images,  developers use geocoding. Geocoding is a computational process that converts the geographic coordinates to a description of a location, usually the name of a place. Then the name of the area is overlaid on the image in a template.

HOW TO MAKE AN APP: LIFE CYCLE OF MOBILE DEVELOPMENT

The "Lens" is one of the most exciting features of Snapchat. It allows users to add real-time effects and alter video images by using face detection technology. This feature became possible when Snapchat acquired the startup Looksery. The startup does a facial modification and enables users to simulate their appearance for a photo or video chat in real-time on mobile platforms.

Now, we find out how it works.

Stories functionality enables users to broadcast photo and video content from their lives to friends; each story lasts 24 hours. It refers to free content and provides users with capabilities in the same way as social networks do.

Later this feature was expanded to "Live Stories." Stories enable new functionality when Snapchatters who are at the same event location (such as music festivals or sporting events) can contribute Snaps to the same Story.

The "Discover" option provides a new way to explore Stories from different editorial teams. It contains sponsored short-form content from major publishers, such as BuzzFeed, CNN, Mashable, People, and many others. Every edition is refreshed after 24 hours, because, as the Snapchat team believes, "what's news today is history tomorrow."

SHOULD YOU HIRE APP DEVELOPERS NEAR ME OR OUTSOURCE OVERSEAS?

Tech Stack for the Snapchat-like app

Below you will find what software Snapchat uses. Consider the following technologies to develop an app like Snapchat so as to be on the same page with your development team. 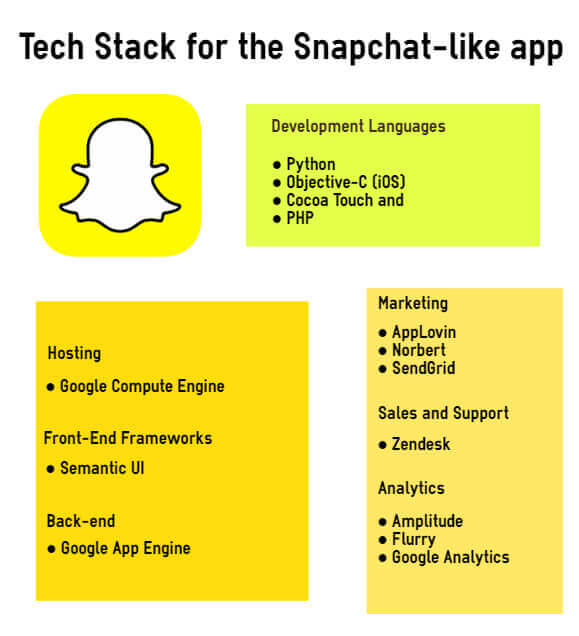 How much does it cost to build an app like Snapchat?

A Snapchat mobile app seems to be a vast machine with many features. It will take more than a year to create apps that look like Snapchat. And the price of this will be high as well.

How much does it cost to make another Snapchat?

Build Your Own Dedicated Team

You also can check out the feature list and estimated development cost below.

But we recommend launching apps similar to Snapchat as MVP. The MVP of a Snapchat-like app will include only the essential functions as registration, media content sharing, user profile, and text messages. Find the estimated time in the table below:

Our latest social media project is QuePro, a public chat mobile app that will connect users with professionals from various spheres.  QuePro allows users to post their queries or questions and receive answers from local professionals. 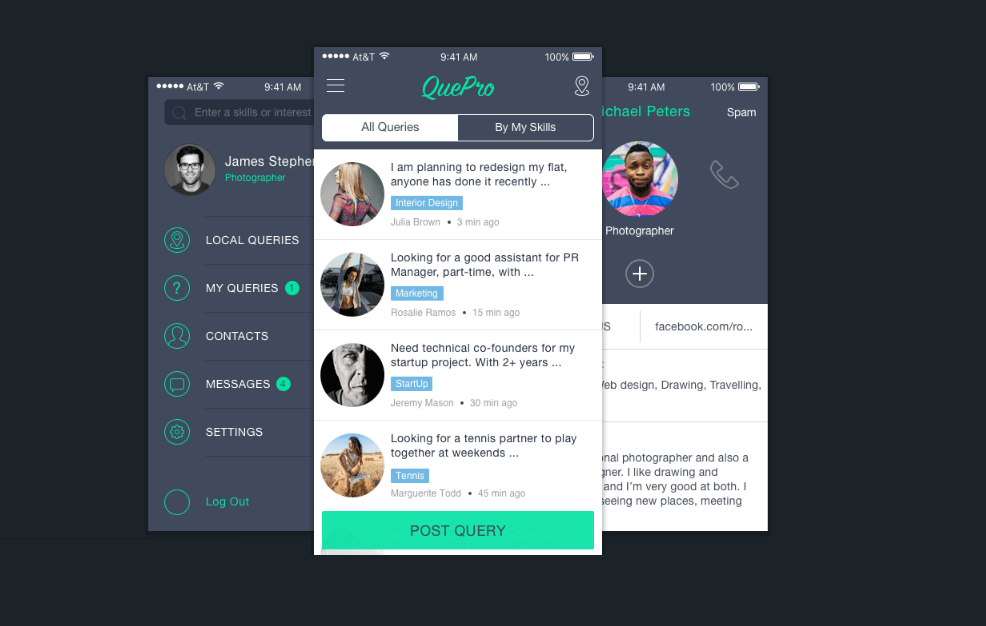 Read the full case study to find out more about this project.

We have also developed AllSquare, a social media application for golfers. AllSquare offers users many opportunities to share their golf achievements, engage with golfers from all over the world, and find a golf course nearby. 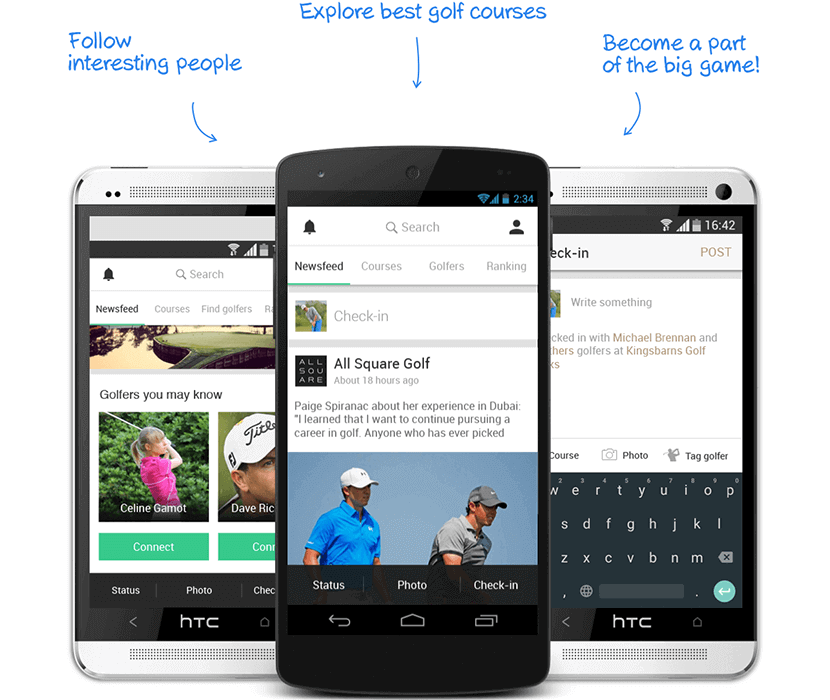 To create AllSquare, we used:

in combination with RX Java for accessing the app backend.

In this way, we implemented the reactive programming paradigm for asynchronous operation with API, files, and databases.

Follow the link to find out more about this project.

Snapchat, one of the most popular social media platforms, provides users with numerous tools for photos and video editing. The most notable Snapchat features are lifters and masks, powered by a machine learning algorithm.

Since the platform has many integrations and sophisticated features, it is hard to give an accurate project estimation. However, you should take notice of the following - chat app development cost is determined by three main factors that have an impact on the total budget and project duration.

So, feel free to contact us with any questions on how to develop a chat application. The App Solutions team will help you to estimate and realize all of your project ambitions.

HOW TO CREATE A SOCIAL MEDIA APP

HOW MUCH DOES IT COST TO DEVELOP AN APP LIKE AIRBNB?

How-To
Agile Healthcare: How to Implement the Approach

Healthcare organizations can accelerate the introduction of new ideas and learning through the following key elements derived from Agile principles.

How technologies can protect healthcare organizations? Security strategies to save patient privacy.

How-To
How to Start a Neobank